It doesn’t take an expert to say this – if we’re going to be sitting at home all the time, we’re going to watch more TV. Streaming services such as Disney+ Hotstar and Netflix have benefited massively from global lockdowns as users look for entertainment while at home. According to new data from content aggregation service JustWatch based on usage of its platform, popular streaming services such as Netflix, Disney+, and Amazon Prime Video have seen an uptick in interest the world over.

Even specifically in India, all the key streaming services have seen a big increase in interest on the JustWatch platform. Zee5 is the biggest gainer, with an increase of 259 percent in the period between March 24 and April 24. During the same period in India, Netflix saw a 204 percent increase, while Amazon Prime Video (189 percent), AltBalaji (174 percent), JioCinema (161 percent), and Disney+ Hotstar (149 percent) all saw significant boost as well. Similar data from JustWatch for the US shows even larger gains for the global platforms, including Netflix, Amazon Prime Video, and Disney+. 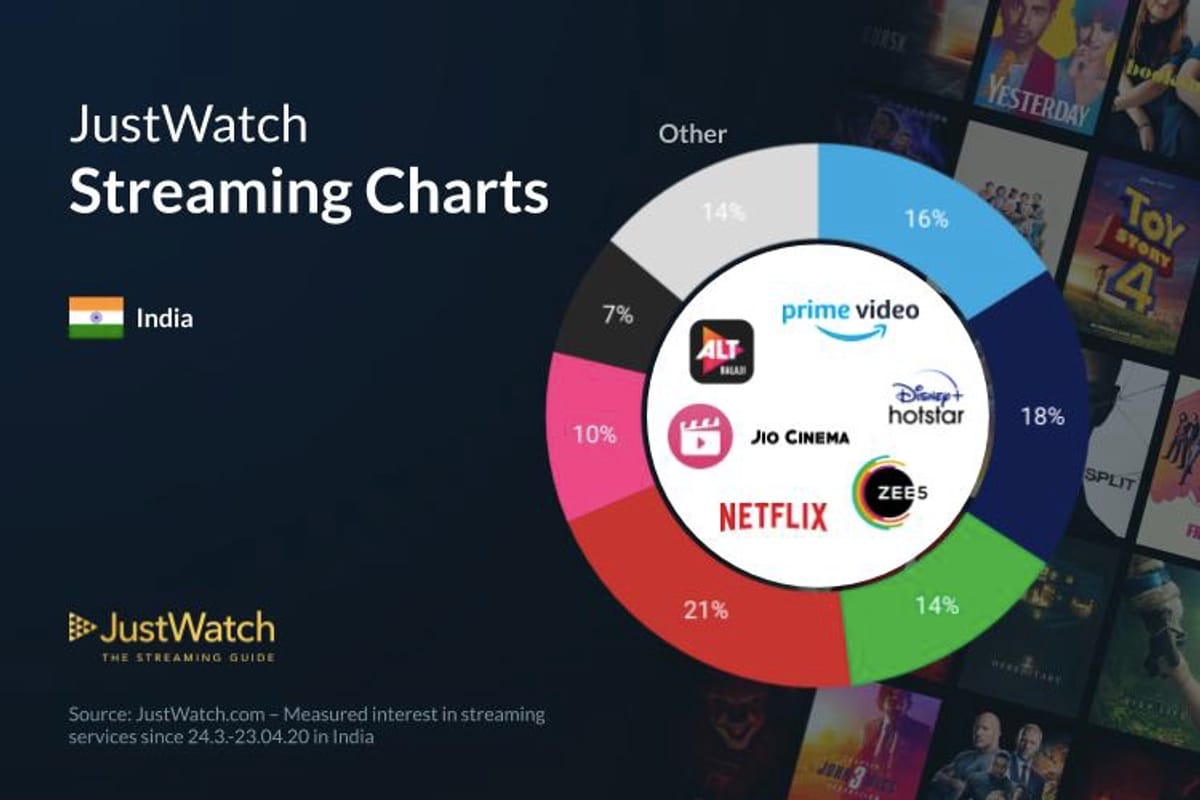 While the data shared is specifically for JustWatch, it’s safe to assume that overall use of streaming services and their popularity has increased similarly on a global scale. As people all over the world are forced to shelter in their homes to stay safe from the coronavirus pandemic, streaming services have given people quick and easy access to TV shows and movies to keep themselves occupied. Streaming services could be one of the biggest gainers as the world moves towards spending more time at home and social distancing over the long term.

Even though Zee5 got the biggest boost, Netflix continued to reign supreme among all streaming services in India, based on consumer interest on JustWatch. According to the content aggregation service, Netflix accounted for 21 percent of total searches. Disney+ Hotstar, which now combines the catalogues of Disney+ with Hotstar’s excellent India-specific content, came in second with 18 percent, followed by Prime Video with 16 percent. JustWatch lets users search for content and provides tailored recommendations, linking users to the right streaming service where the content is available. It is a great service if you want to find where a particular movie or TV series is streaming in India and around the world.

Ali Pardiwala
Ali Pardiwala writes about audio and video devices for Gadgets 360 out of Mumbai, and has covered the industry for a decade now. Ali is a Senior Reviewer for Gadgets 360, where he has regularly&ampnbspwritten about televisions, home entertainment, and mobile gaming as well. He is a firm believer in 4K and HDR on televisions, and believes that true wireless earphones are the future of the personal audio industry. Ali is available on Twitter as @AliusPardius and on email at alip@ndtv.com, so do
…More